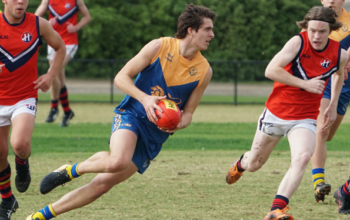 Caitlyn Steer, Karina Cherry, and Jemma Holmberg all represented BSSC at last week’s Victorian Secondary Schools Orienteering Championships at Bullengarook, near Gisborne. The early rain cleared away and the girls competed in mainly sunny conditions. In a great result, each of the girls placed second in their respective events – Caitlyn in the 16A event (4km), Karina in the Open A event (4 km), and Jemma in the Open B event (3.4km).

The BSSC girls tennis team competed in the SSV State Finals in Melbourne this week. Only eight teams from the state make it through to state finals, so it was a great achievement to get that far. The team started well and had a closely fought win over Cathedral College Wangaratta 3 sets 21 games to 3 sets 16 games. Their Maribyrnong opponents proved too strong in the second round, and they narrowly lost the final round to Aitken College 4 sets to 2. All of the girls won at least one of their matches for the day.

Our Premier League football team scored their second win for the season this week with a nail-biting three point win over Hallam SC. It was an evenly fought contest all day with the biggest margin throughout the game being nine points. The BSSC Lions led by five points at ¼ time and ½ time, but Hallam had a good third quarter to go to the final change with a two point lead. They continued to lead until James Schischka kicked a goal with less than two minutes on the clock, and the boys hung on in the remaining time. They now play Catherine McAuley College in the final round, with the winner to host a semi-final.