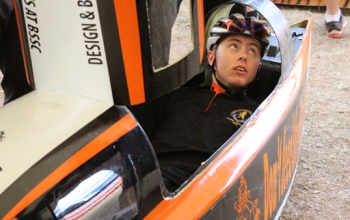 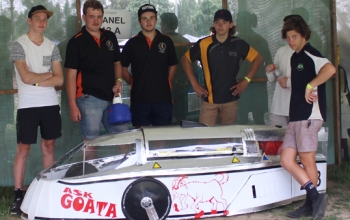 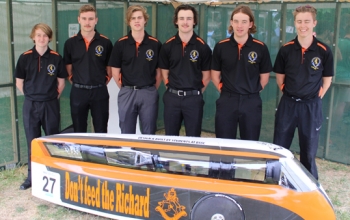 Congratulations to the three BSSC teams who braved Saturday’s 30-degree heat to take out podium positions in each of their categories of the RACV Energy Breakthrough.

Designed, constructed and raced by our Competition Vehicles students, ‘Don’t feed the Richard’ raced in the Open category. The fresh canopy design and a carbon fibre and chrome-moly frame made it the lightest vehicle students have ever constructed. ‘Left handed Screwdriver’ in the all-female class and ‘Ask Goata’ in the hybrid category were both improved versions of the vehicles raced at events earlier in the year.

It is a huge credit to BSSC students that they design, const

ruct and race the vehicles themselves, and are still competitive with commercially constructed vehicles raced by elite cyclists from a few other entrants.

The 2016 race was the fastest for many years, thanks in part to a new track. After six hours of racing the three BSSC teams were in the podium positions for each category. ‘Ask Goata’ finished a clear second and seventh overall, a strong performance for a vehicle and team that were on a budget. The all-girl team ‘Left handed Screwdriver’, also finished second after some tough battles earlier in the race.

‘Don’t feed the Richard’ had one of the toughest battles with the gap between first and third less than three laps with just eight hours to go. By race end, this team claimed second overall. In 24 hours, BSSC’s human powered vehicle could have travelled to and from Melbourne three times, having travelled a distance of 958.64 kms!

Many thanks to all the students who participated and the staff that have helped out along the way including; Mark Bannerman, John Cordedda, Peter Hamilton, Stuart Hamilton Catherine Trimnell, and Tim White.