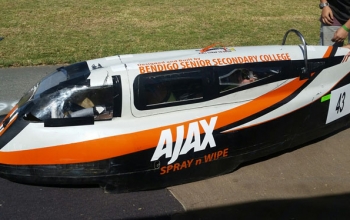 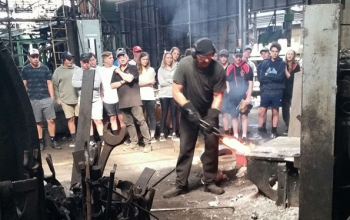 BSSC’s ‘Zooper Dooper’ and ‘Ajax’ finished in the top 10 overall, and clinched first place in both their categories at last weekend’s Wonthaggi Human Powered Vehicle Grand Prix. This race, a major event on RACV’s Energy Vehicle racing calendar, attracted 70 other teams from schools and community groups across the state—and further afield.

The students from the Product Design & Technology Competition Vehicles class, took a detour on their way to Wonthaggi to visit the largest forging factory in the southern hemisphere, Ferrous Forgings.

But the real focus of the weekend was the race—a 24-hour marathon. Riders and pit crew performed in conditions that deteriorated to ‘horrid’ with severe winds and torrential rain eventually forcing stewards to abandon the race two hours early.

The vehicles, one a rebuild from last year and the other a prototype built from scratch this term, performed well despite a number of spills and the atrocious weather.