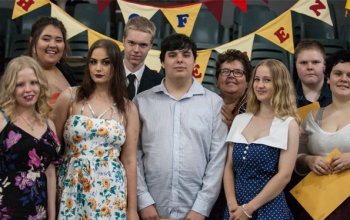 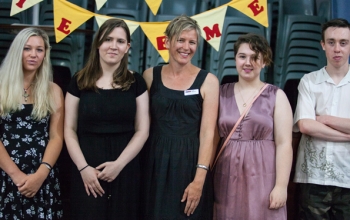 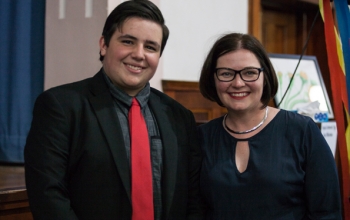 James King Hall was packed to the rafters on Thursday evening for NETSchool’s annual Recognition of Achievement event—a chance for families, friends and staff to reflect on and celebrate the achievements of learners who have overcome so much in their education journey.

NETschool provides a highly individualised program supporting each learners’ wellbeing and providing access to formal studies in line with each Learner’s individual needs. Along the way NETschool learners develop the resilience to confidently participate in a wide range of activities and social contexts, and the confidence to learn on their own and as part of a collaborative team.

On Thursday evening, all our NETschool learners were recognised for their achievements, with several receiving special awards. The Everest Award went to Olivia Cornwall, The Change-Maker Award to Abbey Wharton, and the Achievement of the Year awards were presented to Tulli Simpson and Teagan Carboon.

Federal Member for Bendigo, Lisa Chesters, reflected on her admiration for the learners. “Research shows us that people learn differently and NETschool respects this,” she said. “These learners show great resilience… they just keep turning up and giving it their best.”

Member for Bendigo West, Maree Edwards, a long-time supporter of NETschool, said she would like to see the NETschool program set up across Victoria.

Program Facilitator, Daniel Gibbons, described NETschool learners as “courageous” for “making a conscious effort to plan for their future.” He also described the pride and satisfaction mentors had in rebuilding learning confidence.

This was echoed by the learners themselves.

“It’s been a massively supportive group and Lauren, my mentor, has been my rock,” Michael said.

“Even though Year 12 is stressful,” explained Maddy, who is also working two jobs, “I have had a great mentor in Paige. A real highlight for me was finding out a couple of days ago that I had passed!”

For Zoe, the highlights of 2017 have been too many to list. “All the activities we enjoyed on the camp to Rubicon—horse-riding, white-water rafting and a high ropes course—were great. I’ve felt so supported by everyone at NETschool, especially my mentor Paige. It’s just awesome!”

Lachie, who often brings his dog to school, said NETschool had changed his outlook on education. I was so disengaged when I arrived, and it has raised a passion for learning in the areas I am really interested in—sociology and product design (woods)—but I have also been happy to do the maths and English.”

As always there was music to accompany the formalities, with Paige Thomet playing a beautiful version of Taylor Swift’s  ‘Ronan’ and  Charlee Tuckerman singing  ‘Brother’. Later in the evening, a larger group of NETschool musos did a great job of The Lumineers ‘Ho Hey’ that celebrates how ‘I belong with you, you belong with me…’

When music teacher, Brad Kemp, was asked about a NETschool music program highlight, he chose this one: “When you see the penny drop and learners realise they can do it.”

What a wonderful evening and a fitting acknowledgement and celebration of the fantastic NETschool achievements of 2017. Congratulations to everyone.