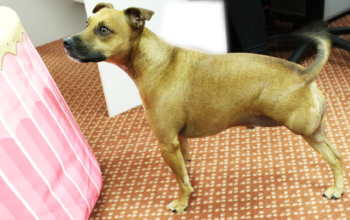 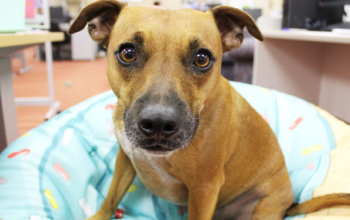 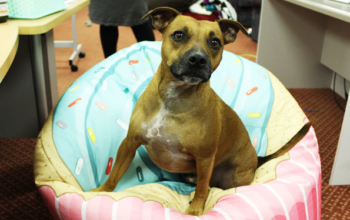 Four-legged friends come along to BSSC’s NETschool at least once a week. Now NETschool are taking their appreciation for their ‘canine colleagues’ to a whole new level. On May 20, at least ten students will join the throng walking their pets around Lake Weeroona to raise money for the RSPCA.

It’s just possible that leading the pack will be a small three-legged brown staffy-cross named Django who owes his life to the RSPCA—and his devoted owner, Year 11 student, Kaily.

Abused and neglected, Django arrived at the RSPCA as a severely underweight puppy who was bald, badly scarred and had a shattered rear leg that had never been treated. Despite best efforts, the leg was beyond salvage and vets had to amputate

It seems incredible that this spritely, obedient, sooooo-friendly, happy little fellow who regularly accompanies Kaily, to NETschool, had such a hard start to life. But Django is an example of what love and attention, good food and a comfy bed can achieve.

“We have dogs come in regularly to NETschool,” teacher Emma Smart said. “There’s no doubt that dogs change the mood. And Django is amazing. He can tell when students are not travelling well and will pay special attention to them.

And if he hears one of the babies crying downstairs he will often whimper. Really, he has been an inspiration to everyone here… if Django can keep on going and be so open to life, then so can we!”

In truth, Kaily and Django seem to have rescued each other.

“My Mum died just over 18 months ago,” Kaily said. “I was devastated and couldn’t even get out of bed—let alone go to school. I decided maybe a dog would help. So I went out to the RSPCA.

When they brought out three-legged ‘Sam’ the bond was instant,” Kaily said. “He’s now ‘Django’ and I have to get out of bed every morning because I have to walk him.”

Although Django had never been inside a house, “he was more curious than afraid of things like the vacuum cleaner,” Kaily said, as Django held up his paw for a ‘high 5’.

Kaily is planning to become an accountant when she finishes VCE and perhaps in the more distant future, a police officer—working with the dog squad of course. Meanwhile, she and other students hope to raise a lot of money to support the fantastic work of the RSPCA.

Django says: “Give them heaps!”