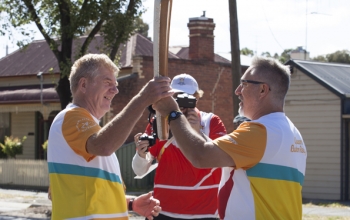 BSSC staff member and Former Bendigo High student, Laurie Preston, carried the Queen’s Baton along Napier Street this morning. The Queen’s Baton Relay wound through much of the centre of Bendigo and featured 20 locals who have contributed greatly to the community.

Among many others who enjoyed the honour were past students Dennis O’Hoy and Kaye Trimble.

Laurie was nominated to be a participant by a friend in recognition of his involvement in local athletics over more than 50 years. Laurie joined athletics to compete as sprinter, but stayed on and now fulfils the role of Official.

However, the name, Laurie Preston, has always been associated with projects and organisations that benefit young people: RACV Energy Breakthrough, Eaglehawk Dahlia & Arts Festival and School Chaplaincy are just some of them. Laurie has also had a career as a maths/science teacher, influencing students over more than three decades.

If you look on the James King Hall honour boards, you’ll also see he was Captain of Wilcock House in 1966.

Asked about the significance of an event such as the Queen’s Baton Relay for BSSC students, Laurie pointed out that the Commonwealth Games predominantly offers opportunities for young people. “As well as the honour of being nominated, I want to encourage young people to get involved in community or sporting events,” he said. “Things that bring us together to achieve something worthwhile.”

The entourage of buses, police cars, security staff and Queen’s Baton Relay officials arrived like a carnival on wheels. Laurie emerged from the participants’ bus and, with his family, and an enthusiastic bunch of supporters to wave him on, accepted the baton from Andrew Barling and set off towards Lake Weeroona and the next baton exchange point.