From refugee to shining success

From refugee to shining success 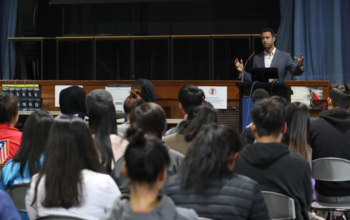 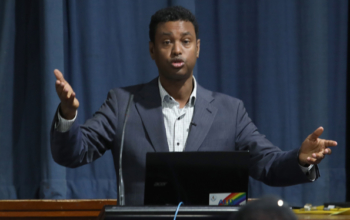 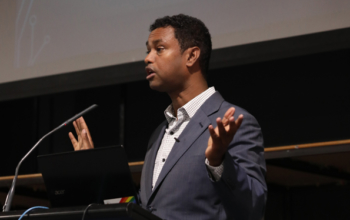 BSSC students today had the privilege of hearing former Somalian refugee, Abdi Aden, tell his life story. The war in Somalia literally arrived on his family’s Mogadishu doorstep just after he arrived home from school one lunchtime in 1990.

With the war, the benefits Somalians took for granted—like free health care, no taxes except for large corporations and access to education—were swept away in violence and death.

Displaced and lucky to be alive, Abdi aged just 15, fled from the remains of his home. He joined a group of 300 refugees who walked over 700km to Kenya. Most did not survive the journey.

At one point he was taken away to be executed and yet—inexplicably survived.

He returned to Mogadishu after realising how horrific the conditions were in the Kenyan refugee camp. There, informed his entire family had died, he retrieved his birth certificate as well as money his mother had hidden, and bought a false visa and ticket to Switzerland—unfortunately ending up in Bucharest, Romania, right in the midst of the Bosnian war.

After a terrifying ordeal filled with insecurity and danger, Abdi arrived in Melbourne as a lone 15-year-old refugee.

Since coming to Australia, Abdi has embraced every opportunity available to him. He is now a university-educated author and motivational speaker focused on using his experiences to inspire young people and adults to do the same.

“Yes,” he told students, “I struggled with mental health issues. Yes, it was really hard learning the language. But I knew I needed to be genuine—to be myself,” and he urged students—especially the students from a refugee background—to learn English, to make new friends, to seek to be included and to be inclusive, and to find a career or area of study they are passionate about.

“Australia will give you a ladder to climb as high as you like,” he said. “Make sure you do not wait for the elevator.”

Despite the enormity of his suffering and struggle, Abdi captured his audience with a compelling account of his experiences told with warmth, humour and openness to questions.

Those who are interested may enjoy his book, ‘Shining’. YouTube has numerous clips and the SBS program, ‘Go back where you came from’ features Abdi too