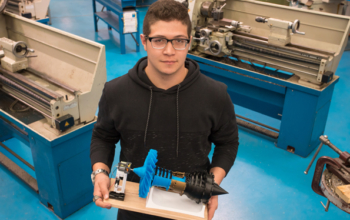 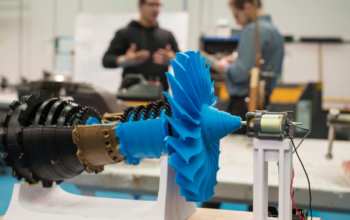 His love of engineering often keeps him awake at night, but the Year 11 student wouldn’t want it any other way.

“From a very young age I was interested in how things work,” Jack says. “I loved spending time with my two uncles who were both engineers. I was fixing cars when I was 12.”

Jack was born in Lebanon, but spent three years in Malaysia before arriving in Australia in December 2016.

“During those three years in Malaysia we were home-schooled by our mother,” he says. “I learnt English on the Internet through my passion for Science and Maths.”

After three years away from traditional schooling, Jack is making up for lost time, embracing his studies in VET Engineering and Systems Engineering with a sense of urgency.

Believing that a lot of engineers don’t really understand how an engine works, he designed and built his own jet engine, powered by an electric motor. Each individual component was 3-D printed.

“It took a full week – 24-hours a day – to print the entire engine,” Jack says. “At night I had to get up every few hours to check the progress or reset the printer.”

It’s just one example of his dedication – working towards a much bigger dream that includes joining the RAAF as a mechanical engineer and one day gaining a Masters Degree in Engineering so that he can teach at university level.

“Australia has given me so much already and I want to repay that,” Jack says. “I love teaching others and helping them understand engineering. I believe everyone is on this earth to do ‘something’. I feel like I’m here to do something good for the world… to create something that will help people.”

For now he’s using every spare minute of the day to work on his projects that include a 7hp drift car, and a much larger jet engine, this time built from all-metal components. He’s also designed several robots and has his own YouTube channel.

Jack loves to get his school work ‘out of the way’ quickly so he can work on his projects and make the most of the facilities at the Trade Training Centre.

“BSSC is the best school I’ve ever been to,” he says. “It feels like true learning to me… practical and real. The Trade Training Centre is amazing.”

Next month Jack is looking forward to work placement with JJ Automotive and then Bendigo Classic Automotive.

There’s no doubt it will inspire a new project… or two.