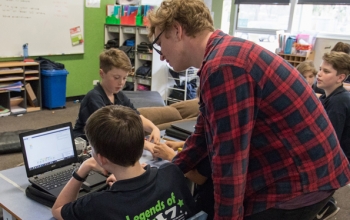 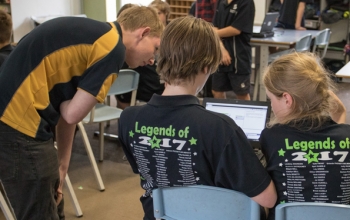 BSSC students involved in the Maths/Science Specialist program having been visiting Strathfieldsaye Primary School over the past two weeks to guide Year 6 students participating in a robotics programming project.

“The purchase of the robots was made possible by a grant from the Strathfieldsaye Community and District Enterprise group,” BSSC Maths teacher Kris Ellery said. “As well as visiting other primary schools in 2018, we will be offering a more sophisticated form of the program next year to senior VCAL students.”

BSSC student James Goode, who has plans to study engineering, described the project as “a simple approach to introducing kids to STEM.”

James, Jordan Curran and Caitlin Allman (who attended a robotics program called ‘Robo Gals’ at Melbourne University in 2016) prepared the classroom with a series of masking tape ‘tracks’ that students used as a guide to steer the robots using their computers. Once the little vehicles had completed a particular ‘path’ connected to the computer, they were able to repeat the track without connection.