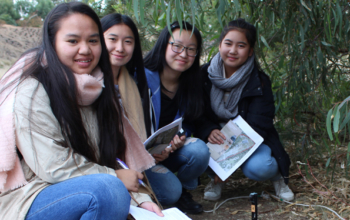 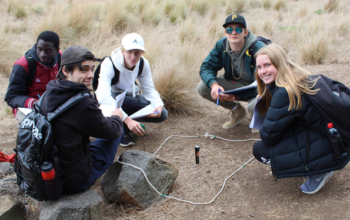 Year 11 Biology students had a great experience last week visiting Werribee Open Range Zoo. This 225 hectare sanctuary has a focus on protecting endangered species and creating habitats that are as close to their ideal landscape as possible.

A major focus for this field trip was Perameles gunnii, the Eastern Barred Bandicoot, which is a threatened species once native to Victoria. It was thought extinct with 99% of its habitat destroyed and no way to protect itself from cats and foxes.

However, as the class heard from their Ranger/Guide, a small group were found living in old cars in the Hamilton tip a couple of decades ago. Since then a captive breeding program and careful release program has seen the bandicoots creep back from the edge of extinction.

Students filed in quietly to the nocturnal ‘house’ where they were able to closely observe a female bandicoot busily foraging—and very happily accepting worms from the Ranger.

Most students had not heard of the Eastern Barred Bandicoot before. But there were plenty of interesting facts that caught their attention.

Darcy commented, “I think it’s pretty interesting that they make nests, not burrows.”

“Yes,” Jackson said, “and the fact that they make a new nest every two days.”

Cress was impressed that they could jump up to one metre—they are only about the size of a meerkat—and Will was surprised to learn so much of their habitat had been destroyed. (Grasslands once covered 33% of Victoria—they now cover only 0.1%.)

Mikaela was aware that they were nocturnal marsupials, and Chantelle found it interesting that, “they have this role in spreading seeds which stick to their coats.”

Students then participated in a citizen/student science project evaluating the contents of one-metre-square quadrats set across a grassland presently being created at the zoo.

After lunch, it was off on safari where the group had incredibly close encounters with rhinoceros and giraffe. There was just time to visit gorillas, lions, wild dogs and monkeys, before the trip home.

It was a great field trip that highlighted the important role zoos now have in conservation. The final word goes to Sophie who said, “The meerkats made my day.”