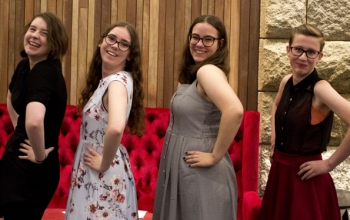 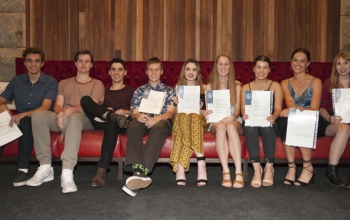 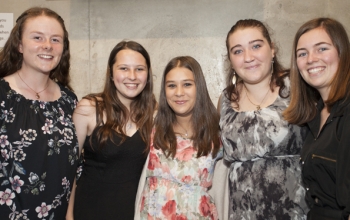 The efforts of around three hundred students were honoured and celebrated at Wednesday evening’s annual Awards Ceremony. In keeping with the BSSC ethos of inclusivity, the awards covered a large variety of subject and extra-curricular activities, and encompassed both reward and encouragement for recipients to maintain their pathway.

Acting Principal, Linda Lyons, and Assistant Principal, Meredith Fettling, acknowledged the collective input of the schools each student had attended before BSSC. “Whatever your pathway beyond BSSC, the journey you have travelled at this college and previous schools will have provided you with strong foundations for a positive future,” Linda said in her welcoming address to the large audience who gathered in Ulumbarra.

Seven students were shortlisted for the most prestigious awards—Student of the Year and Miss Florence Anderson Memorial Award.

A visible jolt of shock ran through Kathryn Northill when it was announced that she was the recipient of BSSC Student of the Year 2017.

In her eloquent acceptance speech Kathryn shared just how very significant BSSC has been for her.

“This school turned it around for me. I was thinking about dropping out at the end of Year 10—and then I discovered BSSC. Look at me now!” she said.

“This is the best school, with the best teachers and the best subjects,” she insisted. “There is a place for everyone here.”

Ryan Peterson, recipient of the Miss Florence Anderson Memorial Award, is presently away on the college’s France-Germany trip. Like Kathryn, he held a number of important roles within the school and in the wider community and was a driving force on Student Council.

Rory Day, this year’s Dux, took a similar approach to that of Kathryn and Ryan, and echoed the importance of remaining engaged in wider interests/responsibilities despite the demands of study. He nominated the word ‘moderation’ as key to keeping a study-life balance.

Rory spoke with great sincerity and passion as he acknowledged the support of his teachers, his family, his peers and the staff at the Old Green Bean where he works. “It was already a memorable year for me, but to also be named dux was incredible,” he said.

No BSSC event would be complete without our fabulous music students treating us to their creative and expansive talents. The divine Madilyn Tyzzer sang the National Anthem and the College Song; Isabella Fortuna’s evocative style was well suited to Lou Reed’s ‘Walk On the Wild Side”; and Sketchy Essentials played some impressive original tunes.

There really was something for everyone at this final night of celebration for 2017.

Congratulations to every student who has put in their best effort.