A night to remember

A night to remember 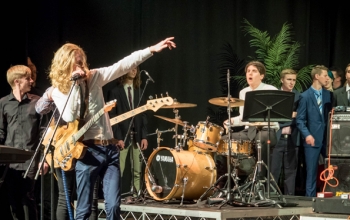 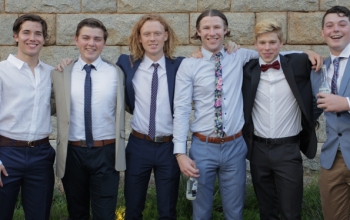 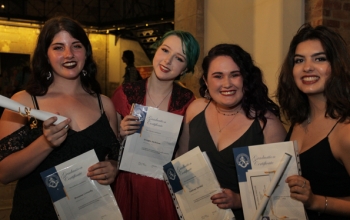 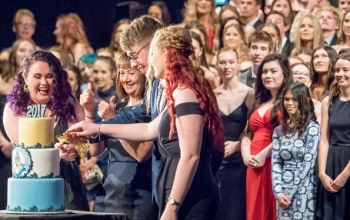 Wednesday evening’s Graduation Ceremony brought together families, friends, invited guests and staff to celebrate the conclusion of secondary schooling for BSSC’s Class of 2017.

MCs for the event, Year 11 students Whitney Eadon and Jack Ryan, provided superb leadership and were joined on-stage for the Acknowledgement of Country by Kyrewyn Tagell.

The audience was also greeted by students representing the diverse cultural groups, and languages offered for study at BSSC.

Unsurprisingly, students and staff from the Music Department provided some inspiring musical performances. Their contributions of both original and well-known pieces and arrangements, delighted the packed auditorium.

Students were presented with their Year 12 group photograph by Principal, Linda Lyons, who also gave the Graduation address.

At its heart, Linda’s message was an encouragement to students for their life beyond BSSC.

“Whatever your future path, I hope this great college has provided you with a strong foundation,” she said.

She urged students, who filled the stage behind her, to develop a can-do attitude towards their aspirations, regardless of obstacles or setbacks.

As the graduating class enjoyed their moment in the spotlight of the Ulumbarra stage, their efforts and commitment were acknowledged.

Student Council members, Caitlin Allman, Kathryn Northill and Ryan Peterson, responded on behalf of the Class of 2017, expressing heartfelt thanks to their teachers, college support staff and families who inspired, encouraged and supported them throughout their education journey.

The college wishes all its graduating students the very best for their upcoming exams and their transition to further education, training, employment, or whatever else the future holds.

The opportunity to participate in a graduation ceremony was almost universally welcomed by students.

According to Jasmine Marek, “Graduation is important because it reminds you that you have achieved something, and the ceremony brings family together.” Asked about a significant teacher, Jasmine named her advisor. ”He was fantastic. He supported my choices and helped me stay on track.” A sentiment echoed by her Mum; “I knew the support was there. It took a lot of pressure off me.”

“I think graduation is a nice send-off,” said Will Thomas, “Like: ‘Congratulations, you’re done’!”

Sarah Flanagan described graduation as, “Celebrating with friends and teachers and marking a mile-stone with people you really care about.”

“I have been greatly influenced by some of my teachers here,” said Deakin Wells.

Students were easily able to name a teacher whose support had been particularly important to them. Some of these were not surprising: a future navy chef whose food tech teacher “really built up my confidence in myself.”

Curiously however, the nominated ‘most influential teacher’ was often from a domain outside what the student was aspiring for their future—PE teachers who inspired future business students; English teachers who motivated future mechanics; Maths teachers who meant the world to students with no plans to advance in this particular subject.